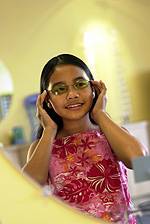 Many kids are diagnosed with learning or behavioral disabilities when actually, that isn't the problem at all. You may be relieved to know that he or she might have a hidden vision issue, which hinders learning. It's known as Convergence Insufficiency (CI).

Here's the breakdown: CI is a near vision problem that affects your capacity to see things at close distances. This means that a person with CI would struggle with reading, writing and working on things, even when it's something just in front of them. A sufferer of CI struggles to, or is entirely unable to coordinate their eyes at close range, and that really infringes on basic activities like reading or writing. And because they want to avoid double vision, people with CI try harder to make their eyes converge, or turn back in. And this added effort can lead to an astounding amount of difficult issues like headaches from eye strain, blurred vision, double vision, tiredness and difficulty concentrating, and reduced comprehension after brief periods of reading. Other issues include difficulty performing computer work, desk work, playing handheld video games or doing art work. At the extreme end of the CI spectrum, the eyes may actually turn outwards, which is known as strabismus.

You may have also noticed that your child frequently loses his or her place when reading, squints, rubs, closes or covers an eye, struggles when trying to remember what was just read, or says that words they look at appear to move, jump, swim or float. Additionally, some kids also have problems with motion sickness. And if your child is sleepy or overworked, it's common for their symptoms to become worse.

Unfortunately, CI is usually misdiagnosed as ADD or ADHD, dyslexia, or an anxiety disorder. This vision condition slips under the radar when a child gets a simple eye exam using only an eye chart, or a basic eye exam at school. Your son or daughter might have 20/20 eyesight, but also have CI, and the resulting challenges associated with reading.

That said, the good news is that CI typically responds well to professional treatment, which involves either supervised vision therapy in a clinical office with home reinforcement, or prismatic (prism) glasses prescribed to decrease some of the symptoms. Sadly, most people aren't tested properly, and because of this, aren't receiving the attention they need early enough. So if your child shows signs of having a tough time coping with anything mentioned above, make an appointment with your optometrist and have your child screened for CI.